A Blonde Bengali Wife has finally moved to its new home on my website WriteRight.

From now on you can find all things literary and all information about Bhola's Children under the 'Blog' tab where, hopefully, it's better laid out, more accessible and quite streamlined.

See you over there! 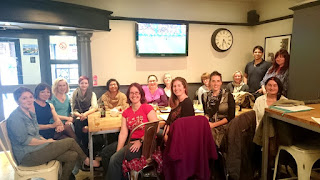 Back To The Writing Game


Catching the tail end of the month here after a whirlwind trip - no, not to Bangladesh - to Legoland, which I must say was amazing. More amazing still, I didn't take my computer and I did barely any work. Guess what - the computer didn't pine without me and the world didn't end. A timely reminder!


Back in January, I decided that I had to get back into the writing groove. After all, five years is probably long enough to hide behind a PhD and use it as an excuse for not actually writing anything else... So I set myself the task of entering a few short story competitions and submitting the novel for any relevant awards.


Nobody has (yet) fallen on the novel and deemed it the next best whatever, but I'm delighted to say I've had some mentions for the short stories - look away now if you want to avoid shameless boasting; I never usually win things so I'm making the most of my moment!

I wrote a story called 'The Shining Girl', set in India, where nothing is quite what it seems, for New Asian Writing, and I managed to get first prize. (I'll gloss over the fact that I received the notification early one Sunday morning and assumed for a long while it was a scam). You can have a look at it here, if you have a spare five minutes:

My second success has been being shortlisted for the Fresher Writing Prize 2016, and that story, The Twenty-Four Hour Promise, examining what happens when a thirty-something woman tells her best friend she's entering a convent, is being published in an anthology, due out about now. More about Fresher Publishing at:

Just last week, the earthquake centring on the Myanmar region was equally strongly felt (measuring 6.9) in Bhola. Thankfully, there was no lasting damage - except perhaps to the nerves of Bhola's Children accountant, Sandy, who had arrived there from London for a few days!

As some kind of affirmation - to myself mostly - that all is well, I've been glancing through the recent photographs and thought, why not share a few more here. It's always a challenge to find 'action' pictures as opposed to group shots - after all, who doesn't want their picture taken - so completely at random (and even more randomly presented, I know - sorry! I do try...) here they are:


﻿﻿﻿﻿﻿﻿﻿﻿
﻿﻿﻿
We currently have a specific appeal for funds to assist with paying Lipi's salary and for the ever increasing, very valuable physiotherapy work. If you know anyone who can help, please send them over to www.bholaschildren.org for more information.
Next month, back to a bit of writing - perhaps!
Anne x
﻿﻿﻿﻿ 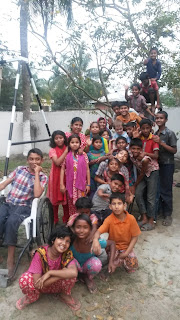 It's probably not often that the Scottish flag is flown on the island of Bhola. Actually, it wasn't this time either. When we arrived mid-February, the boys and girls, resplendent in new school uniforms, were waiting to great us waving Swedish flags - but the thought was there!

Two years since our last visit, and there have been many changes, but the warmth of the welcome remains, and in minutes, I feel as if I'm settled back into my second-home. We travelled on the overnight launch - a 'new' (aka 'almost sea-worthy') one - just in time for breakfast, and after that the time flew by!

Our director, Zakir. has now been in post for a year, and Bhola Garden is settled and peaceful - well, as much as a home and school for fifty one children, a large staff, and frequent visitors ever will be! The younger children head off to the local primary school each morning and have lessons in sign language, Bangla and tailoring, carpentry or cooking in the afternoons. Three of the older boys - each of them deaf - who did extremely well in their winter exams, won places at the local secondary school, and other have a placement in the technical college. 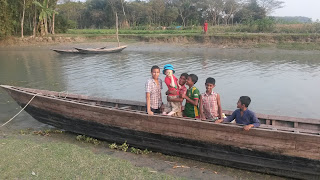 In addition to the local Trustees Meeting - a very positive experience, with some highly committed and influential members (all men just now; but three women are on the way; a huge achievement!) we had tea with the Superintendent of Police and the District Commissioner, both of whom have offered their total support to the project. Bangladesh remains an incredibly administrative country, so this is very significant. But we also had fun - the traditional 'picnic' on the river, where swimming ad a boat ride pleased everyone. 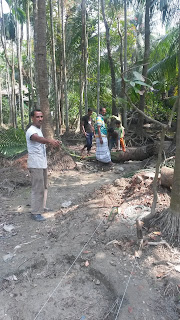 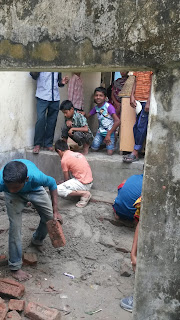 Children and adults work incredibly hard in the community. Each has his or her chores, and when there is a job to be done, everyone gets involved. A big project right now is extending the boundary wall to make room for some milk cows - we're calling the new land 'The Pasture', which in Bangla is less romantically translated as Goyal Ghar   or Cow Shed. Here the boys - Ahardot, Hassan and Rihan in the forefront - are building a new set of steps, and Deepok, our house-father, advises where the new wall will go.  Meanwhile, the girls are cooking an enormous chicken biryani in the neighbouring kitchen.


There is plenty of time for playing: we had a Sports Day with everything from three-legged races to musical chairs and a dance display, and Zakir has added a slide to the (very erratic) swings. The little ones have only a handful of 'indoor' toys; the few jigsaw puzzles and board games we left were received as such a treat, it was a very poignant moment (next time, I'm packing Lego - here Ripa and Mitu play with what they have) 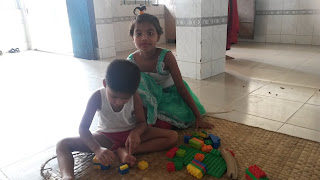 I could write about Bangladesh forever (some would say I already have done!) so I'll leave it there. There are more photos on our Bola's Children blog on the website: www.bholaschildren.org and, courtesy of Dinah's camera and, back home, Trustee Nick's editing skills, there will be a video before long...

I do just want to add a thank you to everyone who has bought the eBook of A Blonde Bengali Wife. I was able to add the first royalties cheque to our donation - and it makes such a huge difference.  Thank you all - and pass it on by sending people to http://www.amazon.co.uk/Blonde-Bengali-Wife-Anne-Hamilton-ebook/dp/B016UDI86I

Brook Cottage Books is thrilled to be organising a blog tour for A Blonde Bengali Wife by Anne Hamilton.

Date: 12th February
- Brook Cottage Books
Please do travel along with us by clicking on the links above. Not only will you be supporting Bhola's Children but getting an insight into some great blogs at the same time!
I'm delighted that so many people are willing to be part of A Blonde Bengali Wife's story - thank you to everyone involved!
Anne x
Posted by Anne at 20:24 2 comments: Links to this post

Happy New Year!
May 2016 bring you happiness, health, a bit of wealth, and many opportunities.
﻿
﻿
Tis the season to make resolutions, or resolve not to make resolutions, and I'm always on the fence between the two. I like the idea of a fresh start but surely the beginning of a new year, and all the hype and expectations, will just set me up to fail... That said, probably like all would-be writers, I do vow to write more. That is, write stories - not tweets, FB posts, features about writing, editing comments, book reviews, oh and blog-posts - and enjoy writing them.
That's the thing, actually. Any resolutions I would make would be boring, safe, obvious. But, one of the many fascinating things about the world of writing is that there are always people out there with the best suggestions and intentions and I wish I'd thought of them first.  So, from a random, stratified, clustered systematic (okay, just random) sample of writers I work with, here are some of the most 'useful'  and simple suggestions for 2016:
Seven Personalised Writing Goals
1 Start writing a journal and once a week make a story (true or not) out of the best bits.
2 Stop waiting for inspiration and write stuff, any stuff, anyway.
3 I don't write anything but shopping lists at the moment. So I am going to make my shopping lists  works of  literary art!
4 When I am editing I will imagine Anne sitting on my left shoulder, poking a pen in my ear and yelling 'Do You Need?'
5 Make a photobook with GREAT captions for momentous events through the year.
6 Remember that stories have a beginning, middle and end. I'm okay at the first, good with the second but the third just peters out.
7 Listen more.
And whatever you do, remember one thing..... 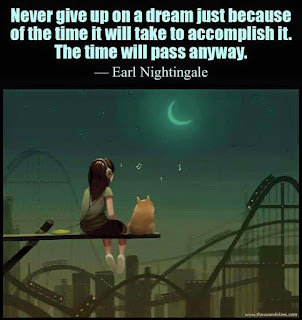