Reflections on the Launch

The people flocked in in their hundreds (well, a wonderfully affirming 68, not all of whom I knew) and stayed beyond the wine and canapes.  The venue was great, the books arrived in time for a long, snaking queue for signings and the attentiveness (other than from Simon who slept from beginning to end) of the audience to the readings and Jacqui's explanation about Bhola suggested that the evening justified a night away from the telly.  Best of all, I didn't fall flat on my face or say anything completely stupid (I don't think).

So, a big thank you to everyone who made it such a success - Neil & Caroline for their respective roles as compere and bar girl!! Ruth for seeing to the food, Julie & my mum for doing stuff that needed doing and Jacqui for the exhibition, the photographs and the 'speech'.  Jacqui Dunbar is a friend and  great photographer, who joined me on one of my longer visits to Bangladesh and was equally won over by both Bhola and the rest of the country; watch out for her photographic work - or hire her to take your pics!  She provided the photos for the book cover too.

It's a very positive start to sales and ongoing publicity and - most surprisingly of all - it was fun... 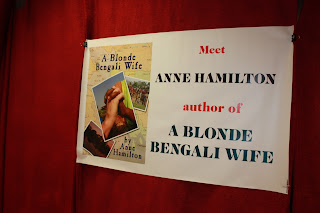 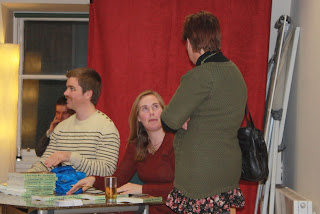 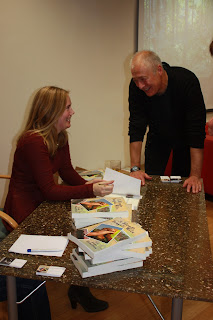 Now it's off to Ireland for a bit of a break before travelling to Washington DC for Thanksgiving.  Back next week when we've settled ﻿in.
Posted by Anne at 18:17