Once upon a time there were three little Hindu girls called Shahti, Khaleda and Aasia.  They all lived and played happily together in Bhola's Garden.  Each of them was deaf but that didn't matter at all because they learned sign language and were bright and clever and they could dance to the rhythm of a drum.  As they grew older, Shahti, Khaleda and Aasia stayed at school for their lessons and they also all learned to cook and to sew.  The time came when Khaleda went away to technical school and Aasia went home to live with her family but Shahti stayed on in the boundary and helped to look after the other children.  She grew into a beautiful and kind young woman.  One day, Deepok, one of the workers there and also a good Hindu, asked Ali if he could marry Shahti.  It was a good match but Shahti wasn't sure, Deepok was so much older than her.  But after many days, she realised that he spoke good sign language, he was a kind man and that she liked to spend time with him, so Shahti said yes to his proposal.  They got married with the blessings of both families, and everyone at Bhola's Children joined the party. Soon their first child, a beautiful baby girl was born and they all lived happily ever after. 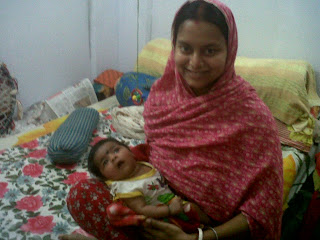