The most frequently asked question I'm asked - from both friends and strangers who have read A Blonde Bengali Wife - is 'whatever happened to Munnu?'  Munnu, the indisputable hero of the story, without whom I would have spent a few interesting weeks in Bangladesh and gone home with some good memories, poor (pre-digital) photos and a diary that would never have made it into a book.  Instead, he was the catalyst for getting to know the country, getting to love it, and staying in touch.  Most importantly though, he'll always be one of the most special friends I will ever have.  We keep in touch sporadically, but somehow the lapses never seem to matter and makes the news all the more exciting when it does come!

So what has happened to Munnu?

When I wrote the epilogue to A Blonde Bengali Wife after my second visit to Bangladesh, Munnu had already left for the USA.  He had won a coveted working visa and was living in New York, staying with friends of his extended family, working in a restaurant - and trying to make sense of the total culture shock.  We have met there twice so far, very briefly, and in the time passed he's managed to get his citizenship, though Bangladesh remains 'home'.

In the meantime, he's made a few extended visits back, one of which coincided with the trip Jacqui and I made in 2008 (as you might remember from a previous post) during which we tried to recreate a mini-version of our original epic journey.  It was very different but just as funny, just as inspiring...

Sadly, at the end of Munnu's 2010 stay, his father died; a very special man who had been respected as prinicpal of the local school but his amazing mother and brothers and sisters are still going strong in Khalia and beyond.

My big news latter on in the same year was that Simon was born, then jubilantly Munnu got in touch to trump me with the information that - 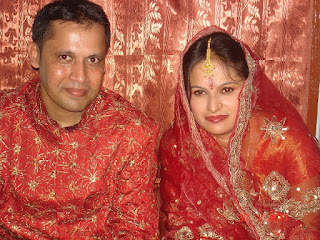 ﻿to the most beautiful bride   and that earlier this year they had their first child, a lovely baby girl...

More details when I have them, (Munnu, I need proper names and details!!!) but right now  I wish them the very best of luck, health and happiness.  Next time we all meet it will be a very different kind of event!