'Excuse me, do you speak motherhood?'


Yesterday, at 10.00am, I started a new job: one day a week for the next few months I will be tutoring two community education classes in creative writing.  At 10.32am, I received a message to phone Simon's nursery ('nothing to worry about, but if you could just call us as soon as you can..' Right.) This had never, ever happened before; it felt like a Candid Camera set up.  At 11.00am I found the staff concerned that a rash on Simon's legs might be chicken pox* so I needed to collect him and see our GP.  Fair enough, even though I was sure that said spots were lingering mosquito bites from last week's dash to sunny, sunny Spain...  Cue hasty termination of writing class session; luckily only one student (fabulous lady called Jean) had turned up.  For the first time, I'd really come across the motherhood/work challenge....

It's the fitting culmination of a month when I've been thinking a lot about motherhood.  Obviously, with a two year old in the house the concept is never far away but it tends to be tied up in the practical - feeding, dressing, changing, stopping him slathering muesli over his feet, the sofa and my Kindle, making sure he doesn't drink too much soapy, possibly-pee'd-in bath water - whereas motherhood in abstract is something few mothers of toddlers will want to peruse as a philosophical PhD.

What I find particularly fascinating is the language of motherhood.  From the moment a women is confirmed pregnant, there are subtle changes: time is measured in weeks, mum and dad are no longer your mum and dad but you and your baby's father, technical words like trimester and perineum creep in.  Labour and delivery is full of shows and epidurals, vernix and ventouse, Syntocinon and skin-to-skin... It's like learning French or Mandrin; a different language.

And it continues: latching-on, weaning, tummy-time... I could go on.  You just think you're fluent and then that stage passes and another arrives and there's a whole new vocab to learn.  It's O'level German with Fraulein Dieter all over again.  I presume once a mother (father), this will always be the case.

At two, poo is paramount.  His poo, my poo, Elmo's poo, Wibbley Pig's poo, the vegetarian sausage in Sainsbury's cafe that apparently looks like poo.

But the day I really knew I was on my way to speaking fluent motherhood?  Simon and I were watching TV together (yes, I admit it - I let him watch TV!!) and I turned to him and said something that two years ago, even one year ago, I would never have had cause to utter.  Something that wouldn't have made sense to me in a million years, but now is second nature.  What was this pearl of wisdom that symbolises my mummy-fluency?


Here's one new mum already initiated into the deaf-Bangla language of motherhood... Monira and Montu (as mentioned last post) with their lovely baby boy: 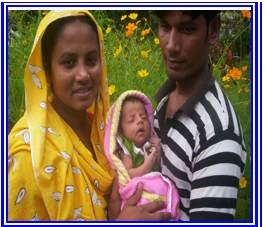